The sun, with its life-giving and sustaining rays is a symbol of the best that humanity can aspire to.

“Zia” literally means sun. The Zia (as the symbol is called) reflects tribal philosophy, teaching the basic harmony of all things in the universe. The simple, linear design is much like a cross with a sun disk centered in front. The figure is composed of a circle from which 16 rays of varying length emanate, arranged in groups of 4, set at four evenly spaced intervals representing each of the four cardinal directions. 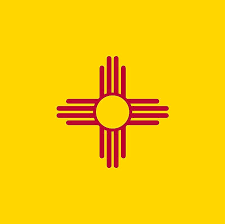 In the State Flag of New Mexico, the Zia Sun is red on a field of Spanish yellow. The Zia’s proportions are fixed by legislative act, with the four groups of rays set at right angles – the two inner rays of each group being one fifth longer than the outer rays. The central inner circle’s diameter is one third the width of the symbol. This differs from the actual “Flag of the Pueblo of Zia of the Keres Nation” on which the symbol is composed of red lines against a white background.

Pueblo means village in Spanish. Though there are at least six nations that comprise the Pueblo Indians, the “Pueblo of Zia” is part of the Keres Nation, situated approximately 35 miles northwest of Albuquerque, New Mexico.

The Pueblo of Zia has supplied New Mexico with its very popular Zia Sun symbol which is found on pottery, art, and other artifacts of the Zia Pueblo tribes, a culture nearly 1,000 years old.

The number four is sacred to Zia Indians, and the Zia Pueblo emblem represents this number as powers of nature:
1) the four cardinal directions
2) four seasons
3) the daily phases of sunrise, noon, evening and night
4) the stages of life: childhood, youth, adulthood and old age

Together, these powers multiply to 16, correlating with the Zia’s 16 rays, and I think this alludes to a deeper, hidden number symbolism relating to sacred spiritual values.

As 16 is the square of 4, and a square represents stability in most cultures (as in foursquare), it is reasonable to assume that a deeper meaning of the Zia Pueblo sun symbol is that of being unyielding, unhesitating, firm, stable, solid and steady as the geometry of the design implies.

The Zia philosophy is one of pantheistic spiritualism; they believe that everything is bound together in an eternal circle of life and love – a great brotherhood of all things with four personifying the number used most often by the “Giver of all Good Gifts”.

The Zia also believe, that man has four sacred obligations, namely to develop:
1) a strong body
2) a clear mind
3) a pure spirit
4) a devotion to the welfare of his people

To achieve the above 4 attributes, one must be in dynamic mode. Purity, clarity, strength and devotion must be strived for and constantly worked at. These are not static qualities; like a circle, with no beginning and no end, they are always in a process… running water stays clear; devotion needs expression; exercise strengthens, and kind deeds contribute to purity of spirit.

It is in such ways, that an individual or nation in turn, can aspire to be as the “sun”- symbolic of the “Giver of all Good Gifts”. The sixteen rays (powers of nature) are the paths along which such a goal can be played out or radiated. This in turn, leads to the stability of tribe, nation, people.