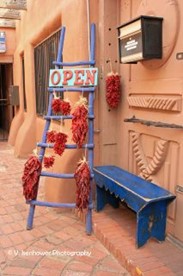 You will see many ladders leaning against walls in New Mexico. As a symbol of cultural continuity, the wooden pueblo ladder connects its users to their ancestors, the universe, their spiritual beliefs, and one another.

Pueblo Indian communities in New Mexico and Arizona center around the Pueblo people’s traditional homes, or pueblos, which are stone and wood structures covered in a mud mixture called adobe. The buildings are constructed into multilevel terraced apartments and, in some cases, contain hundreds of rooms and stand five stories high. In centuries past, most of these rooms were entered by ladder through a hole in the ceiling. These ladders could easily be moved up and into the home to create a solid defense against invaders.

In the arid Southwest, ladders were precious items, since the wood they were constructed from—tall evergreens such as pine and spruce—had to be harvested hundreds of miles away. Today, most pueblos have ground-level doorways, but ladders are used for reaching upper floors. People also descend into underground ceremonial chambers called kivas by way of a ladder.

Pueblo tradition says humans first emerged onto the earth from the underworld. Origin stories recount the first people traveling up a reed (some narratives say a bamboo plant or a notched spruce). Much more than a functional architectural feature, today the ladder allows Pueblo people to tangibly experience their cultural beliefs. By climbing the rungs of the ladder out of a kiva, travelers ascend to Earth, replicating the mythical ancestral emergence into this world, and at the same time connecting to their ancient ancestors who first made these journeys.

Rina Swentzell, a Santa Clara Pueblo author, potter, and historian, beautifully captured these connections between the physical and the symbolic in Pueblo life in the chapter she contributed to the book Pueblo Style and Regional Architecture. “The Pueblo myths, stories, songs, and prayers,” she wrote, “describe a world in which a house or structure is not an object—or a machine to live in—but is part of a cosmological world view that recognizes multiplicity, simultaneity, inclusiveness, and interconnectedness.” The ladder acts as a central link uniting not only rooms but also beliefs, ancestors, and multiple worlds.